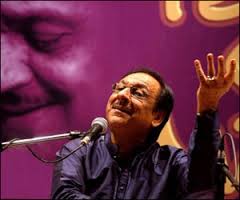 Junoon guitarist and renowned composer Salman Ahmad is all set to perform at the Mill Valley Film Festival in California on October 10, for his upcoming film “Open Your Eyes. – a journey from darkness to sight”.

The HBO movie recently qualified for an Oscar and Emmy Nomination for 2016. Salman has composed the film’s soundtrack, and sang, “Open your eyes” and “Mun kunto maula” with Peter Gabriel. Salman is also all set to share the stage with Grateful Dead’s Bob Weir when he performs these songs, at the festival.

“I will be performing the songs from the movie along with some Sufi songs – and if I do get a chance maybe Jazba Junoon,” he said while smiling ear to ear. His performance will also mark the World Sight Day, which falls on October 8.

Talking to Pakistan Today, Salman expressed his excitement about the show.

“It is always an honour to represent Pakistan. I have always aimed to show Pakistan is a positive light internationally; being part of a Hollywood venture is a step forward for me and Pakistan as well.”

Talking about his experience of working with Peter Gabriel – who is a multi-talented Grammy Award winner and Oscar-winning composer – he said, “Peter is a huge Qawwali fan, so we merged eastern and western styles for the film. Munn Kunto Maula sat perfectly with the idea of the film. The best part is that after Ustad Nusrat Sahab I am the second Pakistani to have the honour of working with him. What could be better?”

The recording process was a hectic one as the duo was separated by the seven seas.

“I recorded the soundtrack at John Alec’s studios in New York, while Peter’s vocals were recorded in the UK at the Real World studios. It was quite an exciting process,” Salman said.

The film, which is based in Nepal, is about an elderly couple who lose their eyesight due to cataracts and then with some help regain it – the story is about their journey. Filmed in around three days, the couple’s urge to see the world once more, and their speculative emotions, are captured with perfection; and Salman’s songs help bring their emotions out flawlessly.

“My aim as an artist and UN Goodwill Ambassador has always been to get Pakistan recognised internationally and to highlight the talent and calibre of Pakistan. Our image needs to be changed and I hope this Hollywood collaboration will open more doors for Pakistan,” Salman added emotionally.

Salman will also talk about his book “Rock and Roll Jihad” which was published in 2014 at the Moth stage in Boston, later this month.