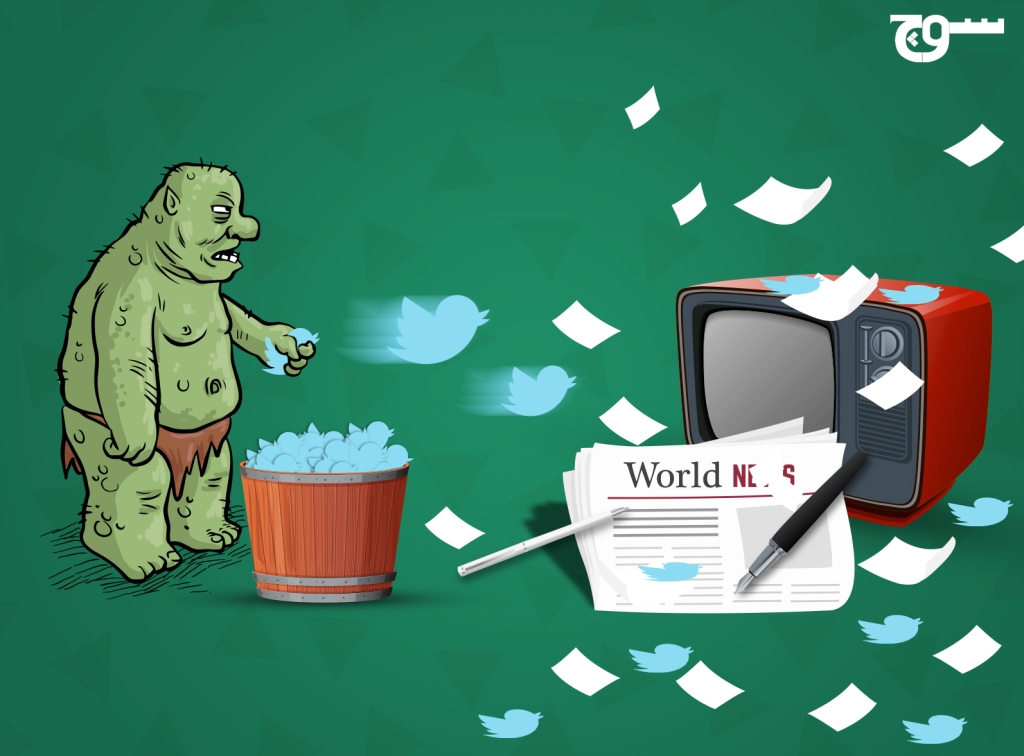 Why is the government so concerned about a social media platform that is only being used by about two per cent of the country’s internet users?

On July 4th, an organised campaign, #ArrestAntiPakJournalists, began trending on Twitter. Using Tweetbinder, a trend analysis website, Soch Writing found that the hashtag was first used by one Zeeshan Ch. This user asked others to retweet the hashtag without providing much context. He was retweeted 32 times. For a country with at least 1.26 million Twitter users, that’s not much momentum. Soch Writing asked Zeeshan about the ‘creative process’ behind this hashtag. He responded, aggressively, but didn’t answer our queries.

The hashtag became viral after it was tweeted by @IK_Warriors, inviting users to “grab your keyboards and start trending”, along with a photo collage of 30 famous Pakistani journalists.

There are hundreds of Pakistani journalists/anchors who are members of the pro-Indian, anti-Pak media group.
They should be arrest. pic.twitter.com/z1Lt1ykpIJ— Team #IK_Warriors (@Ik_Warriors) July 4, 2019

The IK Warriors account claims to be the official account of a group called ‘Team Imran Khan Warriors’. Their Twitter bio states: “We are standing with the Truth & Right”. The team is headed by @Saqi Official and they have a deputy head, @Khilari Offical.

Saqi claims that the hashtag was his idea and Zeeshan is not part of his ‘team of volunteers’. “I thought of the hashtag myself after discussing it with my friends. I don’t even follow Zeeshan nor do I know who he is,” says Saqi while talking to Soch Writing via Twitter direct messages.

Breaking down the hashtag

According to an analysis by Digital Rights Monitor, “The hashtag started with a low of 45 tweets per hour, and in a matter of minutes reached 4,508 tweets per hour”. The highest tweets (2,890) were made an hour into the first tweet by Team IK Warriors.

Further analysis revealed that some accounts were only active during the hashtag and stagnant otherwise. In the days following the campaign, Twitter removed a number of these ‘volunteer accounts’ and many spam tweets that used the hashtag.

The fairly new handle ‘@IK_Warrior’, was one such account. Run by Saqi himself, it was mainly used to retweet the hashtag, increasing its impact. It was most active on July 4th, with over 1,697 retweets and no original tweets. On days before and after the trend, the account was barely active. Another handle @BeardGuy029, which has been suspended since, retweeted the hashtag 839 times.

The team’s deputy head was also seen only retweeting the tweets 434 times, though he didn’t make a single original tweet during the campaign.

One of the accounts that contributed to the trend was @warior_jagga that made 1,435 tweets of which 1,407 were retweets. While @Warrior_gujjar tweeted 1,661 times of which only 47 original tweets. The hashtag had over 5,884 contributors in 48 hours. The following infographic shows five accounts that helped spread the hashtag via retweets:

Volunteers, such as the ones Saqi mentions do not have as much impact as notable Twitter users, and so hashtags that contain dangerous messages should be ignored by the latter, according to Asad Baig, the founder of Media Matters for Democracy, a non-profit company. “The hashtag’s economic value (Twitter lingo) increases when real people (who often have many more followers than the campaigners) start to repost it, even with the intention of denouncing it,” says Baig. “Retweeting and contributing to such hashtags is a bad idea and it’s akin to amplifying hate.”

According to our analysis, the hashtag was magnified by notable Twitter users with ample followers, even if they spoke against the hashtag and even if they only tweeted once. For instance, TV Anchor Ameer Abbas whose single tweet was retweeted 3,525 times, made a significant impact:

The following graph shows the impact journalists, actors, and other famous people on Twitter made with their individual tweets:

Are hashtags like #ArrestAntiPakJournalists organised attempts to curb independent voices? Usama Khilji of Bolo Bhi, a civil society organisation working on internet freedom, privacy and gender, believes that the state apparatus has previously reined in mainstream media, “through pressure tactics such as informal warnings, cutting government advertising to media houses that don’t cooperate, and stopping the circulation of some newspapers and transmission of some TV channels that criticise state policies,” and now they are targeting social media because that is where journalists and thinkers are able to express themselves in a relatively free manner.

According to DRM, this hashtag campaign is a classic case of artificial amplification, when tweets are retweeted just to increase their impact and spread a trend. But Saqi, the team leader of IK Warriors, disagrees. “I have a team of volunteers. We don’t work for anyone nor do we take orders from anyone. We will do whatever it takes for the betterment and security of Pakistan,” says Saqi.

He claims to have been observing journalists who ‘conspire’ against the state, “They [journalists] support Pashtun Tahafuz Movement (PTM), and speak against the army. Hence, we proposed their arrest. We are only talking about the puppets and the traitors, not the true journalists,” he told Soch Writing.

He claims his team has “sacrificed time and sleep over this. We work with our lives on our palms and with coffins over our heads,” while explaining that the trend was meant to hold journalists accountable. “We can’t personally hold someone to be a criminal. But whoever we are sure that this person is against the state, or against the army, or is supporting conspirators in their programs and social media columns they should be cleared up,” says Saqi.

In a tweet from his personal account, DG ISPR Asif Ghafoor condemned the trend, calling it “irresponsible”. Saqi responded to him in a tweet, calling for a law that would prevent journalists from speaking against state institutions.

Between July and Decemeber 2018, Pakistan’s government made 19 requests to remove 2,349 accounts from Twitter. The microblogging website did not comply with a single request. Why is the government so concerned about a social media platform that is only being used by about two per cent of the country’s internet users?

The answer may be because Twitter is increasingly becoming a significant platform for political and journalistic discourse in Pakistan. “It allows for ideas and opinions to be expressed in real-time through short blurbs that can reach millions of people within seconds independent of editorial control or financial dependence,” says Khilji of Bolo Bhi.

Further proof of Twitter’s influence was witnessed on July 8th when three Jang Group employees — Wajih Sani, Umar Cheema and Azaz Syed — were allegedly ‘forced’ to deactivate their Twitter accounts. None of the journalists responded to queries about why they shut down their accounts.

Worried about the impact of the hashtag, the Pakistan Federal Union of Journalists (PFUJ) adopted a resolution urging the government for suitable action against those responsible for the ‘life-threatening campaign’. “Pakistan does not have clear directives vis-a-vis social media yet. Neither does the country have any code of conduct or a system of monitoring regarding social media except that FIA’s Cyber Crime wing which has authority to file a case,” says Shakeel Qarar, the president of the National Press Club.

Journalist Marvi Sirmed agrees that Twitter has grown to become very powerful in terms of setting opinion trends. “Although considered to be an urban bubble, this platform has proven to be very powerful in forcing the state to make or review certain policy decisions,” says Sirmed. In April this year, Sirmed, a vocal critic of the government, the security agencies, and its policies, was targeted with a twitter smear campaign spreading misinformation and inciting violence against her.

She believes that policymakers are becoming increasingly sensitive about what is said on Twitter. “Our Twitter feeds offend the regimes and oppressive forces within and without the state apparatus more than our journalistic stories,” says Sirmed.