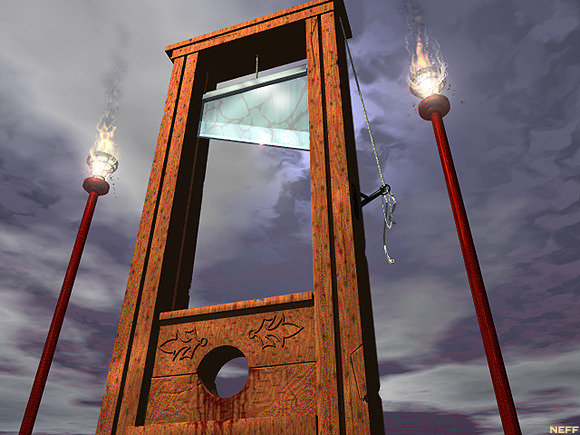 This is a piece of Satire

Machine can detect sect, ethnicity and Muslim-ness of the target

Riyadh: To cater to the macabre spike – highest in the past two decades – of the beheading of terrorism offenders in the country, head of the execution committee has instructed local engineers to construct a special machine, Khabaristan Times has learnt.

“We believe in progressing with the world, introducing new technologies has always been a dream of mine”, said the head of death penalties in Kingdom of Saudia Arabia (KSA), while talking to Khabaristan Times.

The latest technology will involve students of universities along with renowned engineers and architects of the region who have been called on gun point to constructs the death machine.

According to sources, “The beheading machine will be one of its kind. The first test subjects after it will be done will be its makers. As you know it should stay one of a kind.”

The machine will give relief to the rippers and other hospital staffs who have been working really hard to clean the mess created. Reports further suggest that the machine will have the ability to detect the sect, country of origin and the way he prays if a Muslim.

“It will also keep count of the number of beheadings and the reasons because frankly, KSA has lost count,” said a Saudi Official.

Engineers working on the project reveal that the machine would behead the accused by just pressing a button and the body will be thrown directly into a grave created just below the machine.

“The idea is in the process and will be completed in a month until then the execution will continue as usual as we do not want to waste time,” said a South Asian engineer.

“147 or more have already been sentenced to death this year,” says the head of death penalties KSA. “Inshallah the number will double next year.”