With all the art festivals happening in Pakistan, the notion that art is not imperative in this country is easily dismissed. But, Independent Theatre Pakistan (ITP), the country’s first ever ‘registered’ theatre company, tells a different tale.

“The arts council is not investing in the youth. We usually see innumerable literature festivals with the same hegemony,” Azeem Hamid, the founder of ITP and creative director, tells Pakistan Today. “Though it’s not wrong to remember our pioneers, there’s a definite need to raise the curtains on the youth’s talent,” he opines.

Hence, highlighting the need of the hour and to bring the youth’s flair to life, ITP is hosting its latest season, Teen Kahaniyan, from November 30 to December 3 at Al-Hamra Arts Council. ITP has done 12 plays since its inception in 2012, both nationally and internationally.

Their motto BUZKASHA is a word fashioned purely to translate and comprise all of ITP’s professionalism and passion. “We wanted ITP to stand out, hence this self constructed motto which means to enthral, to act, to perform,” Azeem explains.

The fact that the ITP is the first-ever registered theatre company in Pakistan (others are either NGOs or event management companies) illustrates clearly that the love for theatre isn’t actually as thriving as one might think.

ITP, through its theatre, not only wants to play with emotions but also aims to bring back, Pakistan’s culture, thought-provoking ideas and a reason for change. The importance of theatre lies in its power to influence, interact and force it leaves with its live audience.

Ayehsa Mohsin, a theatre graduate from Canada and ITP’s director of script content and analysis, also feels that the theatre is thought of as just a mere hobby, and the interested performers because of lack of resources cannot pursue their passion as a career, “There is immense talent in Pakistan, but it is only the lack of resources, finances and almost zilch curricular help that create a lot of constraints.”

ITP has also been conducting various workshops in public and private sectors of the country to perk up the love of art in the youth.

Mehreen, the artistic director of ITP, told Pakistan Today, “We developed a core team of about 30 people; we wanted to start a systematic, well coordinated company that would represent Pakistan’s creativity and help strengthen the roots of theatre through the upcoming generation.”

Teen Kahaniyan is a set of three short stories, written by three different playwrights. Two of the acts are adapted from the writings of renowned Pakistani writers, Manto and Najam Hosein Syed, while the third is an original play by Ayesha Mohsin, who will be debuting as a theatre director in Pakistan through ITP.

Azeem claims to have legally obtained the rights to all his adaptations, for the love of theatre in a righteous way. “ITP’s ideology is to represent Pakistan worldwide; I want to show the world our capabilities and that we aren’t mere photocopiers. I am building a path, though a hard one but the right one for theatre and my followers.”

Although the three acts are very different from one another, they revolve around the same theme, i.e., to find one’s self, individuality and identity in realism. Each act will be played in a span of 25 minutes.

To add to the extravagance of theatre that is missing in Pakistan, the acts will be performed on elaborate sets, complimenting the acts, using the stage to its fullest and helping the audience better comprehend the director’s vision.

Because the theatre is not thought of as a subject, ITP wants to fill in the gaps through its effort. “A lot of things are missing in Pakistan, technical aspects, visual thinking, and jargons. This is still a niche that ITP is targeting. We are educating our audiences and our talents,” Azeem says.

Directed and written by Ayesha, Bu, is the representation of our society. The play written by Ayesha seven years ago, before her studies, is her vision of how society has transformed into a monster.

Bu revolves around two characters: Amir and Ali, both of whom work in a shoe stock room. They are cramped by filthy shoe racks, a world which only exists within the walls of stacked leather shoes. The location, genre and era of the play are fictional. Both the characters are cut off from the outside world until someone from out there confronts them.

Ayesha expresses her expectations of Bu, “I want the audience to feel the impact with the sort of questions I have raised in the play; they might as well have sleepless nights but I want them to think about it once they leave the auditorium.”

The cast consists of Saddam Khan, Alee Hassan Shah, Nabeel Khan; all of whom are theatre and commercial actors. They unanimously think that theatre is the gym of an actor; it is the only way to touch people’s thought and lives.

“Working with Ayesha was a great experience; she introduced us to different theatre activities and exercises. Taught us a lot of theories that we had been practicing previously but weren’t aware off.” Nabeel Khan, who is a manager at a media house, told Pakistan Today.

This act is a conversation between a fakir and a young girl, Munni, set in the 1920’s. The discussion is between two generations worlds apart, with many a twists and turns. The two roles are being performed by veteran actor Rashid Mehmood and a newbie, Shafaq Yousuf.

The peculiarity of this act is its language, i.e., Seraiki, one of the sweetest dialects of Punjabi but what makes it hard is that it is set in the 1920’s Seraiki and not in the contemporary version of it.

Mehreen explains her pick as, “I wanted to broaden the horizon. Revamping theatre by introducing this unique piece of culture and art was an easy selection for me. People will definitely observe many more traditional touches through our plays in the future too.”

The language may be hard for the viewers to understand but they are not the only ones, “When I was handed the script all I asked Mehreen was, what is this?” Rashid Mehmood, who is doing a stage play after 36 years, remarked while talking to Pakistan Today.

On his hiatus before rejoining theatre, Mehmood shares, “Commercial acting became easier and the theatre happening in Pakistan did not attract me. After watching Mehreen obsession for her work I was convinced I am acting in a far better and proficient environment than ever before. This might sound bizarre but it is true.”

Acting is a ever learning process, reinventing and relocating one’s talent is its fuel: Rashid Mehmood did just that even after four decades of an acting career. “I had to learn Seraiki, rehearse a lot and match their energy. It was a hectic task but it was satisfying!” Mehmood says.

For Shafaq, this is her first play and that too in a language somewhat unfamiliar “This might very well be in Chinese, but I feel honoured to be paired with a renowned name, and to be taught by foreign graduates in this field,” says the newbie.

Mehmood adds his expectations for the play, “The thing about theatre is that even if you do not identify with the language, the actors’ job is to make you feel the play in your veins; our words will travel through ears and settle in every heart and soul, I am confident.” 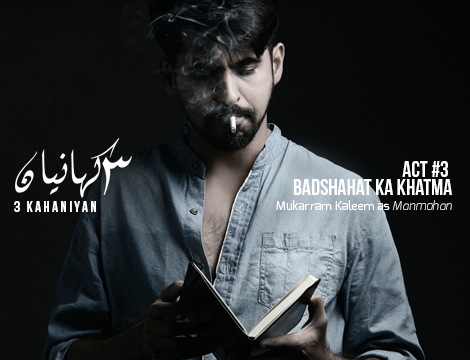 Originally written by Saadat Hasan Manto, this was the first ever Urdu literary piece Azeem read. “The day I read it I knew I wanted to direct a film on it, which may be far at the moment. So, why not a play!”

The story is about an unemployed man, Manmohan, played by Mukarram Kaleem, who has been homeless for the better part of his life but lately with some luck landed at a friend’s office.

Mukarram, who is a well-known commercial actor and anchorperson by profession, fitted the role impeccably, “I illustrated Manto’s description of Manmohan and to my surprise it resembled Mukarram. That was it!”

One day, Manmohan, receives a call from a woman, played by Sana Khalid, who has dialled a wrong number but they strike up a conversation. The events that unfold after the call will keep the audience hooked to their seats making them wonder between reality and mirages.

Muakkaram, who last did a stage play in 2012, feels that the play will be very applicable to all and Azeem’s tailoring of Manto’s story convinced him on this, “Manto had always tried to mirror the realities of the society, this play has been done on an immensely professional level and the audience will definitely be taken by storm.”

The season will commence from Lahore and will travel to Karachi, Islamabad and then internationally to Singapore and Bombay. “This is part of our elaborate plan to make theatre mainstream; one city at a time, some people at a time,” Azeem shares.

The future of ITP is even more amusing and thunderous. Azeem tends to introduce the Broadway culture to Pakistan after the end of his current season, with the ‘Hippy Culture’, “Once a month Pakistan’s very own brand of broadway! My first will be ‘Chicago’ in Urdu, set in the 1960’s Karachi,” Azeem shares his secret and excitement with Pakistan Today.

Watch this space for the reviews of Teen Kahaniyan by Pakistan Today soon.